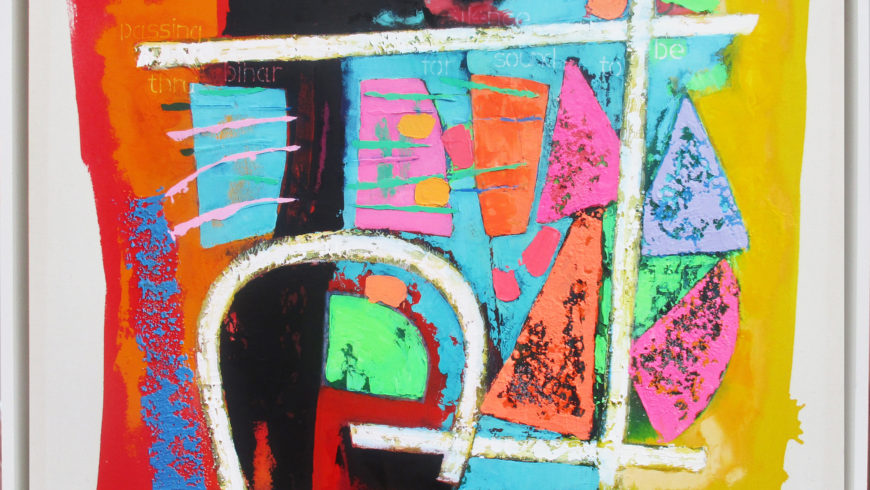 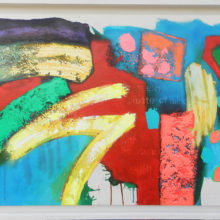 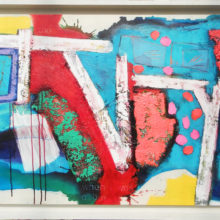 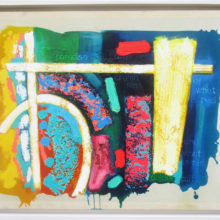 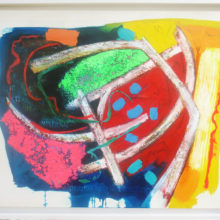 The setting and sources for my paintings originate from a simple vocabulary of motifs, symbols and signals which relate to events, locations and memories of where I have travelled to and where I have lived. I try to paint as automatically as possible. The paintings are intended as glancing episodes composed within illusionistic spaces. The paintings are built in layers, each subsequent layer adding to a series of cancellations which partially veil the applications of colour, and spark improvisations. Other sources which inspire these paintings are varied and many, including early Renaissance art, ancient cultures, historic signs, symbols and motifs, mythology , the “primitive”, coastal skies, landscape, Art Brut, North African art, India, American Abstract Expressionism, Henri Matisse, John Hoyland, the Fauves, Paul Gauguin, Howard Hodgkin, Helen Frankenthaler, Barbara Rae, Hans Hoffman, Alan Davie, Karel Appel, Corneille and the COBRA group. I listen to a lot of music every day and always when I paint. The studio is a great sound booth, and a great place to hear music. There is perhaps a comfortable relationship between the manner of the genres of ambient music and improvised jazz that fits well as a setting for the paintings. Miles Davis and Thelonious Monk are two musicians who continue to inspire me. The images develop through a process of spontaneously creating fresh visual melodies over structured backgrounds that form the settings for the compositions. My paintings are named as characters. Sometimes the names are chosen because of a relationship to the idea or a memory, and sometimes names are invented to compliment the character of the work.

Waterfront Southport – “Beyond The Obvious” 2016